I had completed the Golden Triangle ride in the first week of February which was a ride of 725 km in 48 hours with my dear friend Hemmanshu. Saddle sores and admonishment by wifey dear made me swear to myself not to repeat such adventures. Just as I was recovering from the trip, got a message from Col Sanjay Dhawan who is a passionate rider based at Noida asking me out for 1000 km brevet org by Sonepat Randonneurs. A rough calculation pegged it at 50 hrs on the saddle, six hours of sleep and balance for breaks all in 70 hours. I really dont know why I answered affirmative, partially because I couldn’t say No to Col Sanjay or possibly in my heart, I really did want to test my limits. The ride per se didn’t scare me, but getting sanction from Home Ministry was nothing less than terrifying. I was thinking of the strategy to tackle the omnious task of getting a go ahead for the trip. Possibly Gods intervened and got a green flag with a condition that this would be the last ride for the time being.

Prep was very minimal as I was fresh from the golden triangle ride. A week prior, rode till Akshardam to meet Col Sanjay. Over tea and biscuits at roadside, we discussed tentative plans and rode back to our homes. Enroute managed to get my bike serviced at the Bike Shop, Green Park. I couldn’t manage to practice even once the whole week, blame it on laziness. But did keep my bike on top condition and a put on a new chain.

Managed two days leave inspite of hectic activity at work front. On 14 Feb, packed bags and had a hearty dinner at home. Left at 8 pm to negotiate heavy Delhi traffic to Sonepat where we planned to stay at a PWD guest room. Col Sanjay had arrived before me in the evening and was wondering about my whereabouts. I could only manage to close in at 10.30 PM . Polished off gajjar halwa which Col Sanjay had got for me from the local sweet shop before calling it a day at 11 PM.

Col Sanjay always prepares a detailed hand written plan before any ride. You just have to follow it to the T. Notice the military style success code at the end.

We got up at 0415 to get ready. Anand bhai who the main organiser of the event came in at 0530 to help us guide to the start point. Final checks, warm tea, briefings and handing over of drop bags at the SP, we started at 0600 from Sonepat. It was slightly windy and cold, but the 31 km ride on SH 11 was done in quick time to merge at Rohtak Highway. We took a break at the over bridge before heading left on NH 709 towards Rohtak.

We resumed our next leg of 44 km towards Rohtak. The first CP was at Ashirwad Dhaba were Anand’s cousin was to meet us. We were cruising on the highway maintaining an avg speed of 23 km. It was windy but tolerable. At times it did evoke memories of the eventful 400 km brevet. But then we were riding strong and made it to the CP by 0930 to be welcomed with hot paneer parathas and tea. 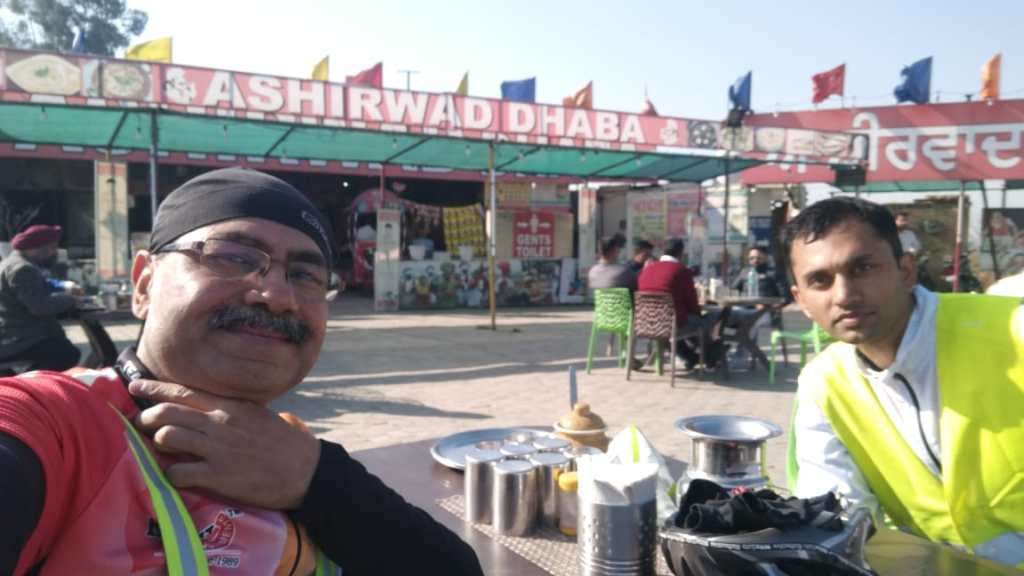 After a hearty breakfast we bid goodbyes and left for the 71 km leg on NH 709 towards GT road. We had head winds and weather was getting warmer as the day progressed. NH 709 is the favourite challenge segment for most of the organsiers and it did test our will power. No wonder PBP aspirants practice on this segment extensively. Had to take routine breaks to refill and refresh.

We reached NH 44 at 1500 at decided to have lunch after Panipat toll. Stuck to usual dal roti chawal dahi which was easy on our tummies.

We headed for our next CP at Dhana Pani at Karnal. GT road traffic was busy as usual. NW head winds were killing us literally. We had frequent stopovers and reached our CP by 1800 to be recd by Rajeev and team of Karnal Randonneurs. Freshened up and refilled our bottles and in the meanwhile got our brevet cards stamped. Karnal Randonneurs which was recently formed has a healthy strength of 75 active riders. One day will ride with this motivated team of riders.

After a good break of 45 min we set out for Ambala which was 75 km away. Food at Puran Singh dhaba had always eluded us in our respective 600 km brevets. This time we made it a point to have dinner at Puran come what may. During the entire segment, the discussion was centered on what to order at Puran. The winds died down thankfully and we picked up speed. Ended up at Ambala at 2115. I had earlier coordinated with my friends at Ambala to meet us up at Puran. They were excited to see us on cycles all the way from Sonipat.

Update 250 km done.
We started for Khanna via Rajpura on the same GT road which was 100 km away. With belly full of sumptuous food and high spirits, we headed in good speed for our final destination. Weather was kind and moderate with no winds or fog. We stuck to our usual strategy of taking breaks after every 20 km which we did in 50 odd min and then resting for 10 min.

Rajpura was done at 2330 and we had 45 km left for our final stop for the day at Khanna. We reached Khanna at 0200 without any problems to be welcomed by Vivek at the control. Brevet cards stamped, we headed straight for our room with our bikes. After quick bath and change, we hit the beds for a well deserved rest.

We started at 0630 against a planned 0600 start after handing over our drop bags to Vivek. It was cold to say the least and slightly foggy. We aimed straight for Ludhiana which was 35 km away. Over the endless flyovers and vast industrial complexes dotting both sides of the highway, we crossed the city at 0830 and made it to Laddo Gali at 0900 for a hearty breakfast of bread and eggs.

Next target was Jalandhar which was 44 km away. At open streches we were getting fog but the temperatures were moderate. It was getting warmer as the day progressed which kept us peeling our layers at each pit-stop. We kept tying those on our handle bars and seat posts.

We reached Jalandar as planned. Here we met Col Shamsher who welcomed us with lip smacking refreshments and cool drinks. We could also coord at night stay at the cantt premises on our return the same night.

Lunch done and water bottles topped out, we headed for Amritsar which was 90 km ahead. It was a good ride with sun on our backs and winds slightly tolerant. Took usual breaks at regular intervals to hydrate and rest 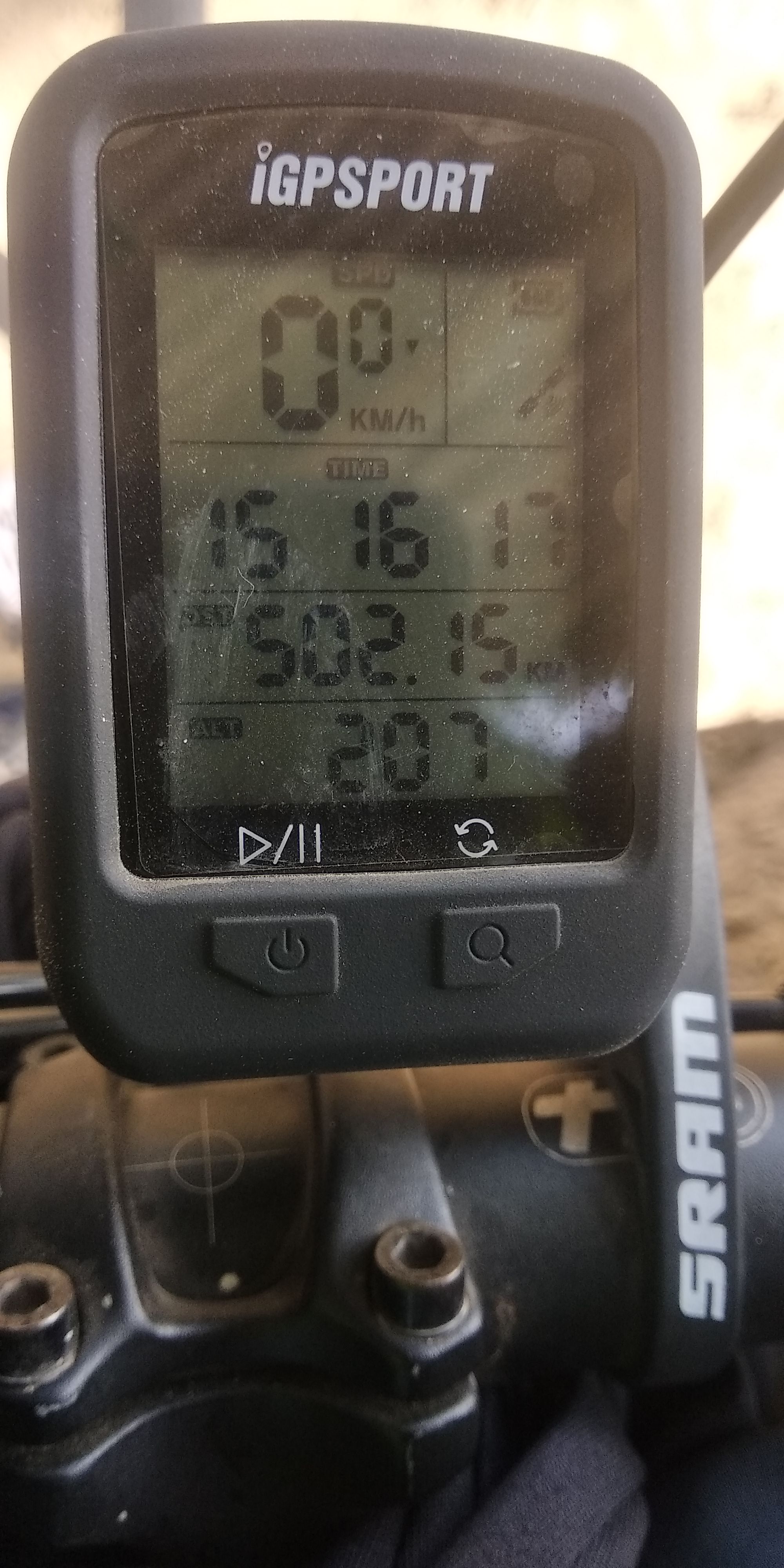 We reached Amritsar at 1630 and took some time to confirm the route to be followed. The bypass was a good 15 km extra so took the risk to negotiate the city amidst traffic. We were lucky to cross the busy city and reach Khasa by 1730. However, we were taking a number of phone calls to coordinate our entry at Wagah border and getting delayed. Managed to reach Wagah at 1830 which was CP for the day. Got our brevet cards signed and topped our bottles. In the meantime took some snaps at the gate. We were unlucky not to get access inside as the gates were closed inspite of all the liaison done earlier. We took it in our stride and started our ride back to Jalandhar were our halt was planned for the day.

Ride back was uneventful as we crossed Amritsar city. Had dinner at an old dhaba opp the railway station. It was some spicy Amritsar kulcha with chola. After dinner we had to stop for ice-creams to cool down the spicy dinner.

Ride back to Jalandhar was getting tougher as fatigue and sleep came creeping in. Add on to fog which restricted our visibility to a few metres. We had initially planned to halt at Khatarpur for the night but changed to Jalandhar at the last moment. Now this added another 25 km to the ride for the day. We had no other option but continue as our drop bags were already placed at Jalandhar. Took frequent breaks and somehow reached Jalandhar with nothing other than will power in stores.

We reached Jalandhar Cantt premises at 0300. After a warm bath, we settled for whatever rest we could grab till day break. We planned to start next day at 0630 since we had only 330 km left.

We ordered some eggs with toast for breakfast before the start. It was novel for Col Sanjay to start with tanks topped up but routine for me and saved us lot of time during the day. We started after breakfast and planned a halt short of Ludhiana which was 40 km ahead. It was foggy and cold but spirits were high as we were on the return leg. I was literally upping the ante in terms of speed and missed the planned pit-stop short of Ludhiana.

Crossed Ludhiana and headed towards Khasa. We planned a longish halt at the Mac D short of Rajpura.

Ambala was next stop 40 km ahead. Did it quick time with tail winds aiding us.

It home run thereafter with dinner planned after Karnal. I desperately wanted to have hot chocolate before dinner and Col Sanjay was kind enough to accede to my wishes.

Had dinner at Neelkanth dhaba. Ordered one thali which we shared

We set our Google maps for the flyover after Murthal wherein we had to take a right to Sonepat. Traffic was giving us scares with trucks and state buses filing down at speeds which would put bullet trains to shame.

Managed to reach Murthal turning pt at 0200. Met Anand bhai at the turning itself who rightly guessed we could get lost navigating through the unknown streets of Sonipat. We gunned down behind his car to hit the finish pt at 0305 hrs. It was a watershed moment for us to complete this epic journey of 1003 km trip in 69 hrs with almost six hours to spare.

We chatted a bit with Anand bhai about the ride over hot tea and sandwiches. Our brevet cards were handed over and the ride was immediately uploaded on the Audax website. After customary snaps, we were guided to our guestroom at Sonipat. Anand bhai was kind enough to come to our room and do some stretching exercises on our battered bodies. We bid good byes after that and freshened up. Managed to grab some sleep before heading out in the morning to our homes.

Guess we broke two myths the entire ride. Col S who will be 52 shortly has proven that age is just a number. Two, he was riding a basic BTWIN hybrid which has been his companion over the last many brevets. Hats off to his indomitable spirit and never say die attitude. You can rarely find him without a smile which can boost anybody’s morale and is armed with an unlimited canister of jokes. No wonder I cannot say no to him when he invites for a ride.

Many ask us why do we do such rides. Personally we don’t have a straight answer for this. There is no award or acclaims with such rides. Personal satisfaction, yes, 100 percent. Possibly there is lot of peace when one rides, bordering on meditation where thoughts weave through and become logical and one gets a clarity on issues which really matters.

Body in tatters, it was difficult to justify such rides at home. But sprits were high and one more off the bucket list. There is peace at mind for the time being having achieved the status of an ultra cyclist. Cheers to that. Untill next ride.. Sayanora.